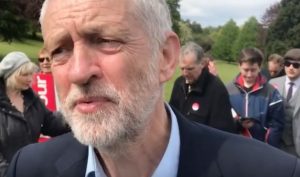 I hope the result of the General Election will clearly demonstrate that the majority of the population of the United Kingdom are caring compassionate people who are concerned about the welfare of less fortunate members of society, are not hard-hearted, money grabbing, and selfish. That is to say, I hope the people will vote for a caring compassionate Party/Government which protects the interests and welfare of all the people not just those of the well-off and privileged few. I know that some will say I must be out of my mind or just plain stupid when I say; in my view the only Party committed to providing such a Government is the Labour Party led by Jeremy Corbyn. I will try to explain why I believe that to be so.

Despite the fact that Jeremy Corbyn has twice been democratically elected as Leader by members of the Labour Party, supporters and affiliated trade unionists, both times with a massive majority, a considerable number of members of the Parliamentary Labour Party (PLP), including some of the other leadership candidates, resent his victories and from day one of his first victory in 2015 have continuously plotted and schemed to oust him from the Leadership. “Et tu, Brute?”

Jeremy Corbyn is not responsible for the parlous state of the Labour Party, on the contrary, it is “grandees” such as Hilary Benn and Chuka Umunna along with other “Blairites” who are to blame, they view Jeremy Corbyn as a “left wing Socialist upstart” who should know his place and desist from ambitions above his station. Veteran Labour MP, Ronnie Campbell, says “Labour MPs from the “Blairite” wing have been acting like they were “born to rule” and (only they) are entitled to choose the Party Leader, they should keep their mouths shut and let Jeremy Corbyn get on with his job”. This from a man, who was a coal miner, has been a Labour Party MP since 1987 and took part in the 1984 miners strike.

I suspect the arrogant “Blue Labour Blairites” will claim he is just a lowly ex-miner, what does he know about politics, know your place. But what I despise most of all about the dissenting MPs, and their supporters, is they seek to justify their conduct by claiming they do so because they consider Jeremy Corbyn to be unfit, unqualified to be Prime Minister, and it is they who are more fitted and better qualified, such arrogance and pomposity is despicable and unworthy of those who claim to be motivated by the desire to protect the less well-off and the disadvantaged from the excesses of a Conservative government. I am astonished, nay dismayed, that these dissenting Labour MPs and their supporters consider a person who advocates a caring, fairer society for all, especially the low paid worker, the unskilled young who cannot get a job or a place to live, those who rely on food banks to feed their children, the old, the sick, the mentally ill, the unemployed and all disadvantaged people, is unfit to lead the Labour Party let alone become Prime Minister. If the dissenting Labour MPs and their supporters truly believe such sentiments make Jeremy Corbyn unelectable, in my opinion, that is more a damning indictment of them than it is of him.

I believe the UK would be a fairer, more caring society with a Socialist Labour Government led by Jeremy Corbyn.