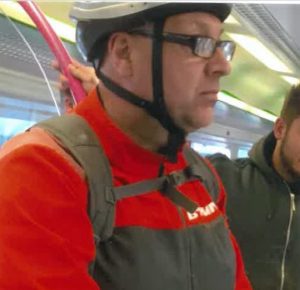 Do you recognise this man?

BRITISH Transport Police would like to speak to him in connection with an incident in which a teenage boy was punched in the face and kicked, in a row over his feet being up on the seat on a train.

The incident happened at around 4pm – 5pm on Thursday 27 April on a train from East Tilbury to Westcliff.

A man boarded the train and sat next to the teenage boy. He shouted at the victim, telling him to take his feet off the seat.

The victim ignored the man, who then swore at him before aggressively kicking the victim’s leg.

Members of the public stepped in and the offender was verbally abusive towards them.

As the train arrived at Westcliff railway station, the offender and victim made their way to the train doors and the offender again spoke to the victim, and then punched him in the face.

Members of the public intervened again.

Officers would like to speak to the man shown in the image as he may have information which could help with the investigation.