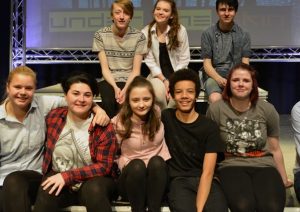 FIRST year Performing Arts students at South Essex College took to the stage to put on two fantastic productions for their end of year shows.

The groups transformed the auditorium space at Thurrock Campus to showcase their talents.

First year Level 2 Acting students kicked things off with their production ‘Under the Skin’ which covered a range of themes including mental health, body image, family, celebrations, mistreatment of individuals and mass hysteria within the media.

The students were given the opportunity to create their own stories, working collaboratively and independently, to devise the 45-minute performance.

Jay Clinton, Level 2 Performing Arts (Acting) Course Leader said: “The standard of work this academic year has been extremely high. It has been lovely to see the students develop their performance skills and technique”.
Following the success of the Level 2 group, the first year Level 3 students brought their production ‘Beyond the Box’ to life.

The physical theatre showcase explored the relationship between humankind and technology through a thought provoking story where society implodes from the pressure of technology. The resulting new community searched for a life more simple ‘beyond the box’, but the box was everywhere.

All students devised and choreographed their physical compositions. The physical story-telling was visually stunning and all 30 performers were on stage for two hours improvising and reacting to the ever changing world.

Sarah Doney, Year 1 Level 3 Performing Arts (Acting) Course Leader, said: “Beyond the Box was stunning, every single performer and production student committed to their role with professionalism, confidence and flair. I’m so proud of them all.”

Both groups performed to audiences of fellow students, staff, friends and family.

Photos from each performance can be viewed on the College’s Facebook page. Under the Skin gallery: