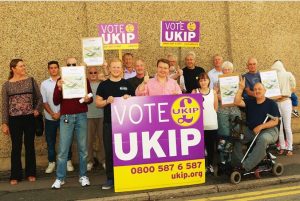 UKIP has slammed Thurrock Council after they have removed “General Election” boards from council property in the borough.

Two years ago, areas such as South Ockendon and Aveley were awash with bright purple UKIP adverts in gardens and bedecked over balconies.

But if you drive around these areas now, it is hard to spot a single one.

YT understands that the posters being removed are those that have been put up on greens etc.

We understand this does not apply to posters in council tenants gardens or adorning balconies.

UKIP Thurrock candidate, Cllr Tim Aker MEP has reacted with anger. He said: “Thurrock Council’s behaviour would make Kim Jong Un blush. To take down garden boards that council tenants are putting up (from whatever party) is a disgrace. It’s excluding residents from the political process. Ratepayers will be appalled to know that Thurrock Council’s priorities range from ripping down our national flag and taking down garden boards rather than fixing the potholes and clearing up our streets.

A spokesperson said: “The council has a legal obligation to ensure no political party gains a campaigning advantage by using any council resources, land or property in which to promote their party.

All political parties in Thurrock were written to on 25 and 28 April 2017 at the announcement of the General Election to remind them of their legal obligations in respect to only displaying their political boards on private land for which they have landowner permission, pursuant to the exemption granted under Town and Country Planning Act (Control of Advertisements) Regulations until 14 days after the date of the election.

The political boards which the council requests are removed are only those on council land, buildings or highways and is pursuant to our duties under the Highway Act 1980, section 2 of the Local Government Act 1986, and Code of Recommended Practice on Local Authority Publicity 2011.

“The council has not taken down nor requested any political boards to be taken down which are on private land, to suggest this is the case is simply not true.

“It is important that the council remains impartial during elections. For this reason, the council does not give candidates and parties permission to display their campaign material on land, highways or buildings owned by the council”.