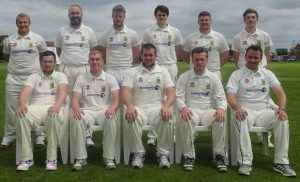 Belhus started their Essex Sunday League premier division campaign with a resounding ten-wicket win at North Stifford on Sunday. Danny Joyce recorded a career-best five-wicket haul at a cost of just ten runs from 6.1 overs, while Martin Guilbert and Matthew Williams picked up two wickets each as the visiting Waltham team faltered. Joe Joyce claimed 1-27 from eight overs in a tidy spell which included two maidens. Belhus openers Michael Fogg and Billy Winter were untroubled and undefeated; Fogg cleared the way with 55, while Winter ended with an exact 50 to his name. Fore the visitors, Asim Aslam top scored with 28, until he became one of Danny Joyce’s five victims, courtesy of a Foggy catch.

The top five Belhus batsmen all made significant contributions to their side’s total but it wasn’t enough as the North Stifford team were overcome by a keen Harold Wood opposition. Danny Joyce with 56, Joe Joyce 20, Roy Heffernan and Matthew Doran, both with 24 runs and 37 runs from Ryan Wells were the mainstays, but it took an undefeated knock of 62 from Wood’s number three Craig Perrin to see his team home to a four-wicket Shepherd Neame Essex League division one win. Doran completed a good all-round performance by taking 4-60 for Belhus from sixteen overs, while Connor Day and Danny Norris picked up one wicket apiece.

70 runs from Wayne Read of Belhus, followed by 68 from Hainault’s Asfaq Ahmad and an undefeated 54 from Shoaib Khwaja were the highlights of this rain-affected match at Barkingside on Saturday. The home side reached their target after 37.2 overs.

Belhus thirds have now achieved maximum points in their opening two league matches following this impressive win in difficult circumstances. Losing the toss and being invited to bat is always a difficult situation in very damp conditions and so it proved on Saturday. Yet Richard Waters weathered the storm of swing and seam to record a diligent 90, which included fourteen boundaries. There was good support too from Zak Wilson, whose 29 contributed to a 58-run partnership for the second wicket, while Michael Cansdale’s 27 ensured a 72-run third wicket stand. With Belhus beginning to take charge, Liam Waters hit 32. For the visitors, Vic and Tobias Goddard, Chris Munden and Taylor Wood picked up one wicket each. After tea, Braydon Scarlett bagged three wickets at a cost of just 21 runs from ten impressive overs to put Belhus on the road to an 83-run win.

Jack Thomas plundered 60 runs, James Barber hit 22 and 29 from Luke Syms. These three Belhus batsmen were the main contributors in another rain-affected match on Saturday, but they had to settle for a draw, despite 3-50 from Ryan Prendergast and 2-29 from Robert Long. For the hosts, Sharad Kerai top scored with 43; he was supported with 32 from Taqveem Ahsan Siddiqui.