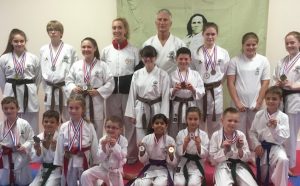 165 competitors from 16 clubs, from as far afield as Oxfordshire and Suffolk, entered the 35 categories, which also included Slam Man categories for the younger competitors.

Each year Shihan Mark Adams and the organising committee try to take the competition to the next level and this year we went on-line with the category listings and the draw sheets published prior to the competition using the http://www.akaao.co.uk/ website. This website is newly formed but was already able to provide valuable help to the organisers by automatically calculating the draw and, by providing the categories early, reduced the number of incidents of corrections at the start of the tournament.

As a schedule of events is produced for the day, “Now” and “Next” categories could be displayed both on screen and on each of the areas, so that competitors and their supporters would always be at the right area at the right time.

The Tournament started with the opening ceremony where each club marched into the arena to music, parents and spectators were clapping and thought this was a nice touch to the Tournament, all clubs lined up facing the spectators and was bowed in by chief referee Mike Tointon.

The standard of the refereeing was very high, with Mike Tointon as chief referee, other referees included Richard Burridge, both national qualified officals. One of the last events, was the male kumite, 5th kyu and above, which boasted three Senseis, all at 4th Dan and another three 2nd and 3rd Dan grade kareteka. The rounds were fiercely, but fairly fought, with a surprise 2nd Kyu outsider, Brayden Hoal, from Yamaguchi Goju-Kai, making it through to the final, before losing closely to Indy Tanabalan, 4th Dan and Sensei of Kaizen Ryu.

The whole competition received much positive feedback, covering the standard of competition, the quality of the judging, the level of organisation and the standard of the refreshments, with some of the clubs visiting Grays for the first time, promising to add this competition to their calendars for future years.