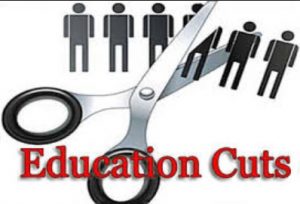 A THURROCK schoolteacher has revealed that they and their colleagues are regularly reaching into their own pockets to pay for school equipment in their “cash strapped schools”.

The teacher, who asked to remain anonymous, has told YT that this is not just teachers in their own school but educational establishments across Thurrock.

The teacher said: “I work in a school and have friends in most local schools. Funding has been cut so much we’re buying all our own stationary. Classes don’t have textbooks and teachers are preparing all resources without them.

“As well as this, the number of Learning Teaching Assistants (LSAs) for children with special educational needs is well below what is needed.

“Teachers, for about seven to eight years have had a freeze or 1% pay rise against inflation of over double this.

“Despite all these cuts schools are still getting in debt.”

Labour candidate in the General Election, John Kent has reacted angrily after seeing this testimony.

John Kent said “As someone who was educated entirely in Thurrock and whose children were – or still are – in Thurrock schools this is an issue very close to my heart.

“I have been privileged over the past few years to have visited many, many Thurrock schools and I have been blown away by the skill, dedication and commitment of our teachers, classroom assistants and other staff in our schools.

Sadly, your Thurrock teacher is saying what many local teachers have been telling me over the past few weeks – and we know the situation will only get worse if we have another Conservative government.

We know that there are another £11 million of cuts scheduled for Thurrock schools over the next two years – that’s over £400 per pupil or the cost of more than 200 teachers.

Labour will introduce a fairer funding formula that leaves no school worse off, while addressing the historical under funding of some schools.

Teachers – as well as nurses and other public sector workers – deserve a proper pay rise so Labour will end the public sector pay cap.

These measures can be funded by scrapping the Conservative plans for schools to pay the apprenticeship levy, not introducing divisive grammar schools and an increase in corporation tax on large companies.”

We will also be speaking to the Lib Dem and UKIP candidates over the weekend.