Horror as little bird shot with an arrow in South Ockendon 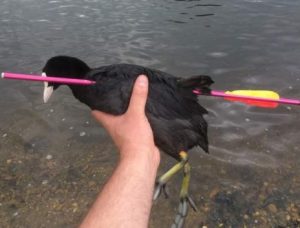 THE RSPCA has launched an investigation after a bird was ’brutally’ shot with an arrow in South Ockendon.

The coot was found with a distinctive coloured arrow in Mollands Lane, South Ockendon, on Monday, May 29th.

The arrow had entered the bird’s body beneath its wing and passing through the other side.

However, miraculously survived the wound, which had become infected.

Animal officer Joe White said: “We caught this poor animal in the nick of time.”

A member of the public phoned in the injury after seeing the bird floating in the lake.

RSPCA inspector Clare Dew and vet Tom Linsel, from the South Essex Wildlife Hospital, paddled out to the middle of the lake to collect it.

Mr White added: “This is a horrifying incident that highlights the cruelty of some people. We suspect that this poor bird was short some days before and has been suffering ever since.

“If anyone knows what happened, we would urge them to contact us and report it. It was a horrendous injury and miraculous this bird was still alive.”

The perpetrator could face six months in prison and a fine of up to £5,000.