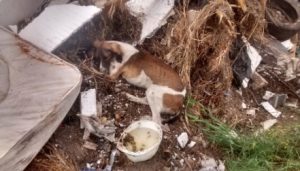 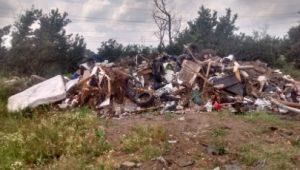 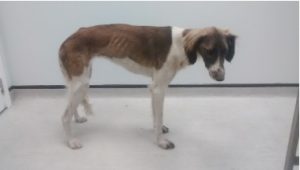 A GRAVELY ill dog dumped with an enormous pile of fly-tipped rubbish was saved from death by chance when she was discovered by two men who had broken down nearby.

The men had stopped in the Low Street Lane, East Tilbury, on Friday afternoon (2 June) after their vehicle broke down.

RSPCA inspector Rebecca Benson, who is investigating, said: “They had walked up to the area near a huge pile of fly-tipped rubbish so they would be safer off the lane and that’s when they spotted a brown and white dog curled up amongst the rubbish and in need of help.

“She wasn’t visible from the road and I hate to think what could have happened to her if they hadn’t broken down in the area and stumbled across her. She must have had a guardian angel looking out for her today.”

The Saluki – thought to be around 18-months-old – was collapsed, covered in mud and couldn’t stand

“When I arrived I couldn’t see her at first,” inspector Benson added, “she was curled up behind a large pile of debris and rubbish. She could only just manage to lift her head.

“The men had offered her water but she didn’t want any. She was emaciated and very dehydrated so I rushed her to a vet who feared she may have some gastro problems so she will remain at the surgery for further monitoring, treatment and lots of TLC.”

The youngster – who has been named Penny – is not microchipped and was not wearing a collar or any ID.

The RSPCA is now investigating and has urged anyone who may recognise her or know who is responsible for abandoning her to get in touch by calling the RSPCA appeal line on 0300 123 8018.

“I strongly suspect she’s simply been cast aside because she needed some veterinary attention and her owner didn’t want to pay for that,” inspector Benson added.

“She’s literally been thrown out with the rubbish and was dumped at a location where she could have easily never have been found. To do something so cold and callous is just heartbreaking and I’d like to find out who is responsible.

“Penny was so dehydrated vets had to keep her on a drip all weekend. But luckily she is now much better and can even manage little walks. She will be moved to one of our centres to continue her recovery and is being cared for by the RSPCA Essex Havering & Harold Hill branch.”

To help the RSPCA continue rescuing, rehabilitating and rehoming animals in desperate need of care please visit: www.rspca.org.uk/give or text LOVE to 87023 to give £3 (Text costs £3 + one standard network rate message).