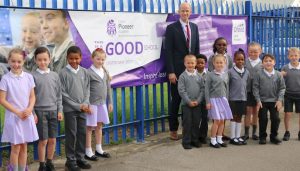 OFSTED inspectors visited the Tilbury Pioneer Academy in late April and judged it to be ‘good’ in every category. This is the academy’s first inspection since it became Tilbury Pioneer as part of the Gateway Learning Community Trust. The predecessor school, Tilbury Manor, closed after being heavily criticised by Ofsted which placed it in ‘special measures’.

In this most recent inspection, Ofsted heaped praise on the Head of School, Dan George and his team of staff and governors for the ‘significant and sustained improvements’ that have addressed the issues of the past resulting now in a ‘rapidly improving’ school. The report states that ‘a large majority of parents consider that the academy has improved significantly in the last eighteen months. Many parents expressed the view that the staff ‘go the extra mile’ to ensure that all pupils achieve well and enjoy school’.

There was particular praise for the curriculum which is ‘tailored to meet the needs of all pupils’ and praise for how teachers work tirelessly to make it enjoyable for all pupils. The report says that ‘teachers have consistently high expectations of what pupils can achieve’. They ‘meticulously track the progress pupils make in reading, writing and maths. They provide swift and timely support for those who need to catch up. Inspectors were impressed how ‘leaders have rapidly improved the culture of reading throughout the school, most notably among early readers.

As a result, pupils’ achievement, including those who are disadvantaged is now higher than the national average’. Younger pupils’ grasp of phonics [the building blocks of literacy] ‘exceeded the national expectation in 2016’ with inspectors stating that ‘this high standard is set to continue’. Pioneer was praised for making ‘provision to accelerate the progress of the most able pupils’, with ‘current information showing that more pupils are on track to achieve the highest levels in reading and mathematics.’

Inspectors were particularly impressed with the strategies the academy has in place to foster pupils’ personal development. These result in ‘pupils demonstrating high aspirations for their future’. They said that pupils ‘relish the many responsibilities that are on offer, such as being a School Council representative’ and that pupils ‘talked with admiration and respect about their classmates who have different religious backgrounds and experiences to themselves.’

In response to the report, Dan George, the Head of School, said “The good judgement is testament to the relentless hard work and commitment of the staff, excellent attitudes to learning from pupils and support received from parents. The Academy has been on a rapid improvement journey over the last few years and I am pleased our achievements have been recognised by Ofsted. We look forward to building upon our strong foundations, making further improvements where needed as we embark on our journey to outstanding.”

The Deputy CEO of the Gateway Learning Community, Viki Reid, said “Mr George, his team, the pupils, their parents and GLC colleagues have taken a deeply failing predecessor school and, in a relatively short period of time, have created a school which is moving rapidly towards outstanding.” She went on to say that “I am delighted for all the children and their parents and all those who have given their unwavering support that we can now shout from the rooftops that Tilbury Pioneer is a ‘good school’.”

To view the full report, see our website for further details: http://www.theglc-pioneer.org.uk/138/ofsted