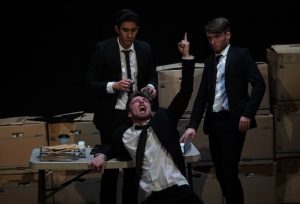 RENDERED Retina are a theatre company from Thurrock, and winners of the LET award 2017, who are holding a fundraising event to get their new show ‘Form’ to the Edinburgh Fringe Festival this year. The event is a performance of the company’s two productions, an award-winning adaptation of Shakespeare’s Timon of Athens and Form (the show going to Edinburgh).

It will take place on the 22nd June at Palmer’s College Lecture Theatre at 19:30pm and lasts approximately 2 hours 20 minutes (including a 20 minute interval). Tickets are £10.

“We have been given this amazing opportunity to perform at the biggest venue, The Pleasance, at Edinburgh this year. But it costs money to get there and we hope the residents of Thurrock can help us achieve our dream” Tom Mangan, Co-artistic Director, Rendered Retina Theatre Company

“[On Timon of Athens] 18 hats, a box and a laugh a minute!” Bernadette Wakeling, Artistic director, Complete Commedia Company

“Rendered Retina are young, fresh and enthusiastic. We could tell that they have a passion and genuine love for theatre… What Rendered Retina did was inventive, slick and clever” James Seager, Producer, Les Enfants Terribles

The company have won awards for both shows being performed at the fundraising event. Their first show, Timon of Athens, won the awards for ‘Best Directed’ and ‘Best Show’ at the Scratch Shakespeare Festival 2015 in Winchester. Their second and current show, Form, won the Les Enfants Terribles award in February this year, selected from over 100 theatre companies across the country.