Air Ambulance were in attendance to a woman who was in cardiac arrest but sadly despite the best efforts of everyone involved she was pronounced dead at the scene.

Our thoughts are with the friends and family involved at this time. 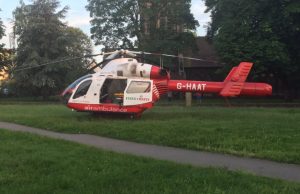 THE AIR ambulance has landed in South Ockendon

A spokesperson said: “We received a call today at 9.14am to reports of an incident at an address on Whitebeam Drive in South Ockendon to which we sent two ambulances, a rapid response vehicle, ambulance officer, and air ambulance from the Essex and Herts Air Ambulance Trust (EHAA) to assist one patient.

“We are still currently on scene and do not have any information on the condition of the patient”.