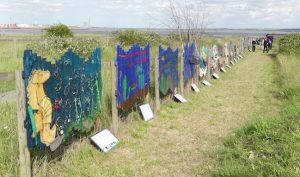 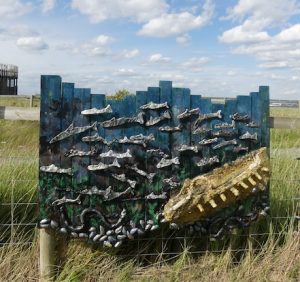 THE winning design of the Thurrock Primary Schools’ “Artistry of the Estuary” crown was announced at a prize-giving event at Essex Wildlife Trust’s Thurrock Thameside Nature Park (TTNP), situated on the banks of the River Thames Estuary at Mucking. Twenty-two Thurrock primary schools took park in this conservation-themed art project, with approximately 40 art pieces produced by 1,300 pupils, across Years 4 and 5.

It was Woodside Academy in Grays’ entry that took home first prize, with their creative design featuring a shoal of European smelt, a European eel, Common mussels and a shipwreck. Second place was Herringham Primary Academy for their piece on ‘Perception and Reality’ and third place was awarded to Abbotts Hall Academy for their wonderful seahorse design. There was also a literacy competition, with Little Thurrock being awarded first prize for their under the harbour poem. The conservation-themed “Artistry of the Estuary” project was inspired by the TTNP visitor centre, which boasts panoramic views of the Thames Estuary.

The project is the brainchild of trust volunteer Adrian Pritchard, which in its third year has seen a total of 34 primary schools in Thurrock participating in one or more of the projects. “Artistry of the Estuary” follows the success of the previous years’ “Sculpture on a Pallet” (2016) and “A Hares Breath” (2015), which are on permanent display at TTNP.

Importantly, the project provided the opportunity for Thurrock Primary School pupils to think about the animals that are found in the River Thames Estuary and focused on what lies beneath – raising awareness of the often elusive animals that are found beneath the surface. Eight species were highlighted: Harbour porpoise, Common seal, Short-snouted seahorse, European eel, Common mussel, Dover sole, European smelt and Common shrimp.

The design, which had to feature at least one of the above animals, was created on recycled pallet wood in the form of a wave shape, representing the flowing river estuary and produced by Trust volunteers.

The bespoke trophies, a miniature version of the wave design, were created from recycled wood by trust volunteer Robin Grace and were awarded to 1st, 2nd and 3rd for both the art pieces and for submitted literacy work, which will be displayed at TTNP. All schools received certificates to commemorate the fantastic work and efforts of the pupils and teachers who participated in the project.

“It was wonderful to see the children’s enthusiasm towards this conservation-themed project,” Sophie Turpin, Essex Wildlife Trust’s Education Officer at TTNP, said. “The standard of entries was very high and each showed incredible creativity so we cannot wait to display these pieces to the public later in the summer as part of an art trail around TTNP. As ever, we are so grateful to InterGen, Coryton Energy Company for their generous support.”

From the 15 July to the 10 September, the 43 Estuary pieces will form a free art trail around TTNP.