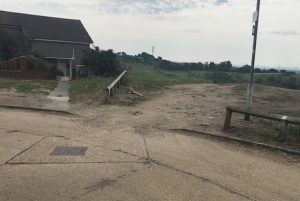 THURROCK Council has been completing work to target harden many open green spaces across the borough in a bid to reduce the number of unauthorised encampments only for gates to be ripped out within hours.

By 9am the day after, the gate had been forcibly removed leaving the land once again vulnerable to trespass.

Leader of the Council, Cllr Rob Gledhill said: “It is beyond belief.

“Thurrock tax payers and residents of Chadwell have contributed towards installing preventative measures to protect their green space for it to have been ripped out within hours.

“What do we do? Set up CCTV on every park, field and grass verge?

“But this is completely unacceptable – and in fact, not the first time. Bollards protecting the area were also criminally removed.

He added: “I have asked officers to speak to the neighbouring residents for any information and we will be working with our partners in the Police. Damage to donated assets is one thing, but the cost of the damage incurred by unauthorised access could be significantly worse.”