On a sunny and bright morning, a moments silence, prayers and speeches from Mayor of Thurrock, Cllr Tunde Ojetola and Leader of the Council, Cllr Rob Gledhill and Rev Canon Darren Barlow, filled the streets as people gathered to show respect for our countries Armed Forces.

Armed Forces veterans, council directors and local residents were greeted by the traditional bagpipe player as the event begun.

Cllr Ojetola opened the event by welcoming everybody. He said: “Welcome to what I am told, is the ninth time we have held this ceremony here in New Road. 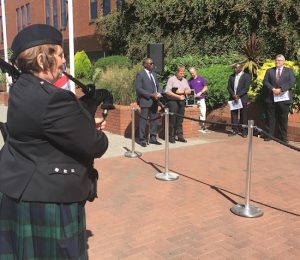 “From its inception, Armed Forces Day has enabled our nation to show its support for the servicemen and women of the Royal Navy, the Army and Royal Air Force at events across the country.”

He added: But it is not just the current serving personnel who we pay tribute to here today; but the whole wider forces community: the service families; the veterans of all ages; the cadet forces; and the volunteers who support them.

“All of these people deserve our praise and support – and not just on this special day, but the year round.”

Cllr Gledhill spoke before raising the flag, he said: “I, as well as all of us here, am proud of our armed services, the personnel who have served and continue to serve our great country, its citizens and our friends and allies.

He finished by echoing the thoughts of the Mayor by saying: “We should not just take a moment today to honour our armed forces; we should take a moment every day to honour those who freely volunteer to serve our great nation and to help keep us all safe.”

Thurrock Council would like to thank everybody who joined us in paying our respects and attended today’s event.