THURROCK athlete, Khai Riley-Laborde produced an outstanding performance to grab a silver medal in the 110 metre hurdles at the British Championships in Birmingham on Sunday.

The event was won by David King from Plymouth in 13.55. Khai, running for Enfield and Haringey clocked 13.71.

Th event was also a trial for the World Championships in August. Khai has yet to get a qualifying time for that but even os, this was an outstanding performance and shows he is going up another level.

Khai is a former William Edwards student and is also sponsored by Stanford-le-Hope’s Cedar Hall Clinic. 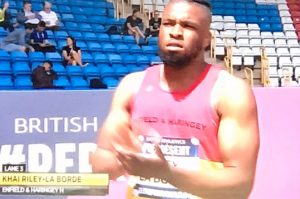