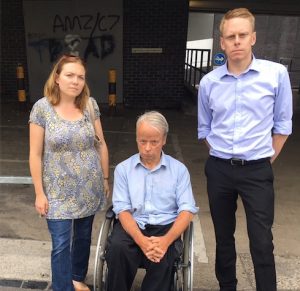 LABOUR councillor Jane Pothecary has called on Thurrock Council to tackle the antisocial behaviour plaguing the Darnley Road car park in Grays. The Grays Riverside councillor asked the Portfolio Holder for Public Protection at full council for action to be taken.

Speaking after the meeting Cllr Pothecary said “There has been a big rise in complaints about antisocial and intimidating behaviour underneath the Derby Road bridge in the Darnley Road car park.

“I have been working with the Police since last summer to try and tackle the problem but they are so stretched, it isn’t a long term solution. The residents of Darnley Road have put up with this for too long and it’s time something was done about it.”

Under questioning from Cllr Pothecary, the portfolio holder agreed to review possible solutions. Cllr Pothecary has vowed to keep pressure on the issue until action is taken.