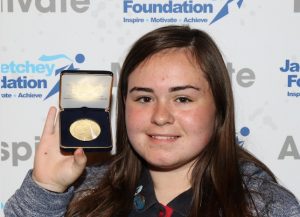 In addition, five adults were also celebrated with Leader Awards who have demonstrated, in an outstanding way, an ability to motivate young people. They received a medallion and a framed certificate.

Guides groups in West Essex have received funding of £465,600 from the Jack Petchey Foundation since funding started in 2001.

Cllr. Tunde Ojetola, Mayor of Thurrock, said “I am very proud to have witnessed the young people of Thurrock receiving their Jack Petchey Achievement Awards this evening. Their dedication to their units, their friends and to their communities is highly commendable. #proudofthurrock.”

Winners included Lilli Latter, aged 12, attends 1st North Stifford Guides (Thurrock West). Lilli is a very capable Guide who has grown in confidence over her time with the Unit. She recently ran first aid sessions for the other Guides, using her skills learnt from St. John Ambulance. Lilli is an true asset to the Unit.

Lilli decided to spend her £250 Jack Petchey Foundation Achievement Award grant on a trip to Jump Giants for her group.

Jade Darby, aged 14, who attends 4th Hornchurch Guides. Jade is the Hornchurch Patrol Leader and never ceases to inspire the Guides. She recently qualified for the 2017 Irish Dancing World Championship and even though she has been training for hours every day, she has never missed coming to Guides. Jade has also been working on her Baden Powell Award, the highest award a Guide can complete, and through this has been teaching the girls about having a positive body image. She has been an excellent role model to the other Guides in making them appreciate themselves as they are, and not how others might want them to be. One of the Guides said “we think we are the best Patrol and it’s all down to Jade!”

Jade decided to spend her £250 Jack Petchey Foundation Achievement Award grant on a trip to Eastminster School of Riding for the Guides.

Mia Christie, aged 13, attends 1st Tye Green Guides (Harlow). Mia is a helpful and enthusiastic Guide. She has recently become Patrol Second and she is extremely capable in this role. Mia has completed her Community Action badge by helping at a retirement home and has received some excellent feedback from the staff and residents.

Mia decided to spend her £250 Jack Petchey Foundation Achievement Award grant on a trip to the bowling alley for her and her fellow Guides.

For further information on any of the Guides mentioned, contact Girl Guides Essex West Jack Petchey Foundation Co-ordinator, Sylvia Partridge at office@girlguidingessexwest.org.uk or on 01708 373 746.

Sir Jack founded the Jack Petchey Foundation in 1999 to recognise the positive contributions young people make to society and to support them in achieving their potential. Since then it has provided support to a wide range of 2,000 initiatives supporting young people across London and Essex and has reached a milestone investing £100m.

Sir Jack Petchey CBE aged 91, said “I am passionate about our awards scheme which enables young people to be recognised, valued and rewarded for their achievements and positive contributions to society.”