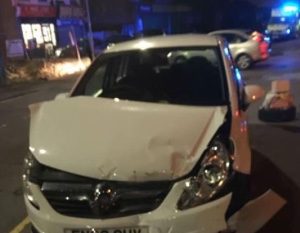 A CORRINGHAM man is set to attend court charged with fleeing the scene of a road smash that left two women injured.

Police received reports of a road traffic collision in River View, Chadwell St Mary, at around 10pm on Sunday, June 25.

Officers received calls that a Vauxhall Corsa and a Ford Focus were in collision and the occupants of the Ford Focus had fled the scene on foot.

Two women in the Corsa were taken to hospital with minor injuries and later discharged.

Police later arrested and charged Shaun Sales, 27, of Rachael Clarke Close, Corringham, with failing to stop following an accident and careless driving and he is due to appear at Basildon Magistrates’ Court on Thursday, July 20.