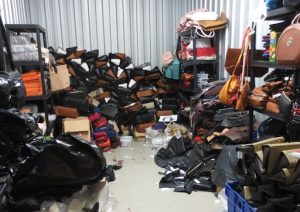 Officers interviewed all of the defendants and conducted a thorough investigation.

Leader of the Council, Cllr Rob Gledhill said: “This investigation began after complaints about the individuals and their activity through Facebook groups and pages. I’m particularly proud of the tenacity our team has shown, working alongside other agencies to ensure not only those individuals who we were initially made aware of were brought to justice but the entire supply chain.

“The judge ordered the forfeiture of the counterfeit goods which will be destroyed or re-used / recycled where possible.

“I’m very pleased an accredited financial investigator will now seek to recover the money earned from this illegal activity under the Proceeds of Crime Act and we will be seeking to recover our costs at the confiscation hearing in February 2018.”

His Honour Judge Graham said it was a “significant and long-running enterprise” and it was clear that “large quantities of income and profit were generated”. He described Haydari as being “at the top of the supply chain” and “instrumental in the importation of these goods”.

When he addressed all of the defendants he said it was “clear that you knew what you were doing was illegal” and that previous warning “should have brought you all to your senses”.

Cllr Gledhill added: “The sale of counterfeit goods not only harms legitimate businesses but is often linked to other criminality.

“My thanks go to the police and trading standards teams across different boroughs who have all pulled together to assist during the investigation. I have asked officers to look at how the unpaid work hours can be used here in Thurrock, perhaps clearing litter or fly-tipping.

“Finally, these investigations would not happen, or be as successful without the intelligence from members of the public. Please keep reporting rogue traders and other illegal activity to the team by calling 03454 040506 so we can take action.”

All five defendants appeared at Basildon Crown Court in July 2016 and pleaded guilty to the following offences:

• Noonan – 1 offence under the Trade Marks Act 1994 for possession of counterfeit goods, 5 ‘benefit fraud’ offences for failing to declare her income and assets in relation to Jobseeker’s Allowance and Council Tax Benefit.

On 2 May 2017 at Basildon Crown Court, the defendants pleaded guilty to the following:

On 30 June 2017 at Basildon Crown Court, the defendants were sentenced as follows: