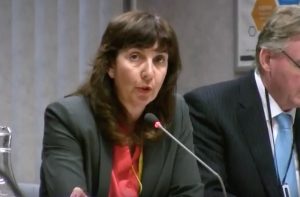 THE THURROCK councillor in charge of litter and bins has herself been binned.

A brief announcement was made at a cabinet meeting last night (Wednesday).

Homesteads councillor, Pauline Tolson had been in charge of environment since the Conservatives came back into power in May 2016.

Cllr Tolson spearheaded “Clean It Cut It Fill It”, a multi-million pound campaign that aimed to clean up the borough.

Week after week, we would hear of the amount of litter that had been cleaned from the streets of Thurrock.

However in recent months, her brief seemed to be beset by problems.

On the hottest week of the week of the year, with temperatures in the nineties, close to a hundred streets in Thurrock did not have their bins emptied due to a large number of bins lorries breaking down.

There was also controversy over residents in Grays receiving bills for fly-tipping in their alley-ways. In the end, Thurrock Council issued an apology.

Finally, according to Thurrock Council’s own performance indicators, street cleanliness and bin-emptying are both failing their own targets.

Councillor Tolson’s performances in the council chamber hardly inspired confidence as she often read from a piece of paper and looked exasperated when opposition councillors asked her probing questions.

But there was still great surprise when her empty seat was filled by Corringham and Fobbing councillor Aaron Watkins.

She will now resume her place on the backbench as a local ward councillor.

No reason had been given for cllr Tolson’s departure.