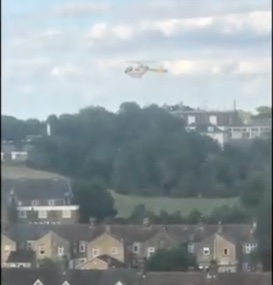 The East of England Ambulance Service NHS Trust (EEAST) received a call just after 5pm today to Orsett Road, Grays, to a report of a man who was found unconscious and not breathing.

They treated a man, believed to be in his 30s, who was in cardiac arrest. Following treatment at the scene he was resuscitated and taken by land ambulance to Basildon and Thurrock Hospital in a critical condition.

YT understands that a person was taken ill at the Thames Complex. Air ambulance medics did attend but they were taken away
by land ambulance.

Air ambulance has left the area.

The air ambulance has landed in Grays.

The helicopter landed on the playing fields at Quarry Hill Primary.

Unconfirmed reports that paramedics have attended at the Thameside Theatre in Grays.