M25 closed due to serious collision

The clockwise M25 between junctions 29 and 30 has now re-opened following a serious crash earlier this afternoon.

A car and a lorry were in collision at around 2pm.

The driver of the car, a woman in her 30s, was flown to hospital.

She is being treated for life-changing, but not life-threatening, injuries.

The road fully re-opened at around 7pm.

Anyone who witnessed the incident or has dashcam footage of it is asked to contact Chigwell Roads Policing Unit on 101.

POLICE are in attendance at an RTC between a silver Kia Sportage and a lorry between junctions 29-30 on the M25.

A woman in her 30s with serious injuries was airlifted to hospital. No one has been arrested.

The clockwise road currently remains closed. Drivers’ patience is appreciated at this time. The anti-clockwise road is unaffected.

Anyone with dashcam footage or who witnessed the collision is asked to contact Chigwell Roads Policing Unit on 101. 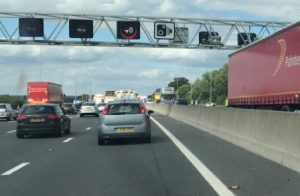 The M25 clockwise is closed at junction J29 and J30. This due to a severe road traffic collision involving a car. This has caused congestion into the surrounding areas and will continue into peak times at rush hour.
The event is expected to clear between 17:30 and 17:45 on 14 July 2017. Normal traffic conditions are expected between 17:30 and 17:45 on 14 July 2017.