Caravan chaos reigned supreme at Arena Essex on Sunday as the curtain came down on another very lively afternoon of racing. 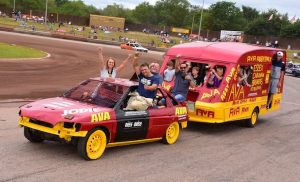 It was something of a faltering start to the race with the pole position man, Luke Betts stalling and Basildon’s Rick Sharp ushered forward to bump start the car and caravan combo. With both nigh on stationary, the race started and Grays, Simon Peters took first blood, diving through the ‘Love Shack’ themed caravan of Sharp. Whilst Peters completed a lap towing his own caravan and most of Sharp’s too, Jason Webb and Alfie Lee added their weight to the home straight carnage. Bradley Turner came to a halt in amongst the debris of his team mate, Dan Reid’s caravan, before Stanford Le Hope’s Bradley Powers disappeared into the back of Webb’s caravan and Peters did likewise into James Donovan. Then in a stunningly spectacular moment, Jason Jackson destroyed Betts Caravan and Alfie Lee simply launched himself into the biggest pile of caravan debris and somehow came out the other side. He then did a lap – destroyed the Jackson caravan and then finally planted himself into the Peters caravan on turn one. His rampage was over but he had deservedly secured the most destructive award.

Dan Wilson was the only intact car and caravan combo at this point but he too was destined not to reach the chequered flag as he was took damage when trying to power through Andy Reynolds and was barely moving when the caravanless Rick Sharp finally put paid to his race and dismantled his caravan on the pit bend. This left just Sharp and Kayleigh Glover to fight it out for the Destruction Derby, although this came to a messy conclusion with Glover diving for the infield when her seatbelt came loose, leaving Sharp to take the win.

Before the chaos of the Caravans, there were four regular Banger races won by Craig Thurlow, Kevin Buckley, Jack Coveney and Tom Greenstreet. Ian Ardley was victim of a big smash in the final which caused quite some delay whilst the medical team treated him. Thankfully Ian was not injured and was released from hospital after being checked over.

Tempers were frayed in the first heat for the Lightning Rods with Richard Norman extracting revenge on Dave Imber in no uncertain terms. The incident lead to two badly damaged cars and a disqualification from the meeting for both drivers. Thankfully the rest behaved themselves and there was some great racing with Jay Page-Fuller once again winning the final, father Lee also taking a win during the afternoon. Sam Shirmer meanwhile was another winner – his car not looking quite as smart us usual, having had to be rebuilt since his major smash a fortnight ago.

Alfie Jones put aside a terrible run of results to win the Stock Car final, a race which featured a huge smash for Dave Palmer, Palmer bending a back straight post as he rode up the fence and clattered back to earth with quite a bump. Billy King and Darren Nash were the heat winners.

Finally there were three brilliant Stock Rod races with Sadie Betts and Alex Martin winning the heats. The final was interrupted by a clash of the Shackleford’s as Wayne was tagged into a spin by son Carl and rolled the car onto its side off the inner kerb. Martin lead away at the restart and crossed the line inches ahead of a determined Jon Turvey and a stunning drive from Dave Crouch, who used the outside line to snatch the place from Carl Shackleford on the line.

The next action at Arena Essex comes in a fortnight with the National Banger World Final Wild Card meeting taking place. Drivers will be keen to secure their place on the grid for the big race in September. The Stock Rod Essex Championship, Stock Cars and Mini Stox provide support. Start time as ever is 1pm.