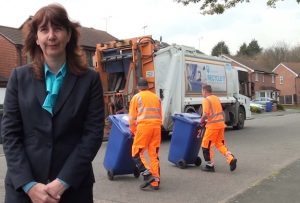 MYSTERY continues to surround the departure of the Environment boss from Thurrock’s ruling Tory party Cabinet. At the July meeting of the Cabinet, councillor Aaron Watkins was announced as the new portfolio holder for the environment – but no mention was made of why.

The grapevine has been chattering and rumour suggests that former post holder Cllr Pauline Tolson has effectively been sacked from the job as a scapegoat for the administration’s continuing poor performance.

YT understands that members of the press have approached the Homesteads councillor for a comment but it appears that cllr Tolson has been effectively “gagged”.

In a related development, it was also revealed at Cabinet that a trio of key Environment department targets had been missed. The percentage of household waste recycled, the level of litter on our streets, and the percentage of rubbish bins emptied on the correct day – each of these crucial objectives had been failed by the Tory administration.

Following the departure of the Tory cabinet member for Environment, Pauline Tolson, Thurrock Labour have highlighted the poor performance of the Tory administration on keeping the borough clean.

Councillor Cathy Kent, Labour Spokesperson on the Environment, said: “The state of Thurrock at the moment is disgraceful. Take our fly-tipped alleys: the Tories do not seem to care about them and have come up with no answers – all they do is blame the residents.

“This isn’t about a particular cabinet member – it’s about an administration who are systematically failing to clean up Thurrock. The recent corporate scorecard shows that not only was the target for street cleanliness missed in the first year of the Tory administration – it is getting worse!

“What makes me particularly angry is we’ve had a lot of empty promises on cleaning up the borough from Thurrock Conservatives. Everyone wants cleaner streets – but at the moment it looks like they are incapable of delivering this.”

“Perhaps it’s time the whole Tory administration follow Cllr Tolson’s example and hand over the job of running Thurrock to someone else.”