Thurrock to mark the Battle of Passchendaele 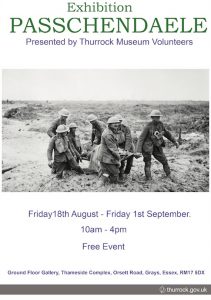 ONE-HUNDRED years ago on 31 July 1917 near a small village in Flanders (Belgium), the Battle of Passchendaele began.

Officially known as the Third Battle of Ypres, Passchendaele became infamous for the mud and for the huge loss of life. Torrential rain turned the landscape into a thick, mud bath which immobilised tanks and made weapons unusable.

The British and Canadian armies eventually captured what was left of Passchendaele village on 6 November 1917. The battle had lasted for three months, caused 325,000 Allied and 260,000 German casualties and advanced the Allies just 5 miles.

The Deputy Mayor of Thurrock, Cllr Mike Stone would like to invite residents and friends to a commemorative event on Monday 31 July at 11am to 12midday to mark the centenary of Passchendaele. The event will take place at Grays War Memorial with a short programme at the Thameside Complex.

He said: “I am very honoured to be attending and laying a wreath.

“I’m very thankful to the World War 1 Commemorative Committee, chaired by Cllr MacPherson, who are organising this important date.

He added: “Passchendaele is one of the many battles of World War I in which brave soldiers from Thurrock took part and where some made the ultimate sacrifice. It is important to continue remembering the immensely brave actions they took for us today.

“I encourage everybody to attend; I hope to see you there.”