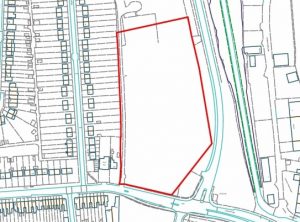 The plans for the site located adjacent to Moore Avenue, Devonshire Road and London Road had attracted strong local opposition, but were recommended for approval by council officers.

Several residents affected by the decision attended the meeting and speaking on behalf of them a spokeswoman voiced their objections, ranging homes being built at the rear of people’s gardens posing a security risk, to the environmental impact and the increased traffic and noise around the busy London Road. She said that every local resident who responded to the plans objected them.

Local ward councillor Oliver Gerrish also spoke to the planning committee objecting the proposals for four reasons: the loss of privacy, the additional traffic, the additional noise and the traffic safety.

Cllr Gerrish said: “Residents currently enjoy a good degree of privacy and are not overlooked to the rear of their properties and this application. Sometimes we underestimate the effect this can have on people and it’s not nice to lose the peace and quiet that you enjoy in your own garden.

“Putting this many properties here will also undoubtedly lead to an increase in noise, including extra noise from vehicles. That’s a given, but given all these properties will be just metres from the back gardens of homes in Moore Avenue.

“London Road is already one of the busiest roads in Thurrock and it’s very likely that these plans would mean more strain on an already congested area. It’s already a challenge to drive out from Moore Avenue onto London Road and the more difficult that gets for residents to more frustrating it becomes. This is not to mention the additional construction traffic in an area that is already congested with HGVs.”

In support of the application, agent James Lawson said the plans meet a significant local need for housing in the area.

Mr Lawson said: “The site is vacant and currently serves no useful purpose. Our view is that the land is suitable for redevelopment and the residential proposals would bring the land back into beneficial use and meet the clear need for new housing delivery within Thurrock, which is currently underprovided for. They make effective use of the site, are well designed, and would preserve the character and enhance the area.”

The site has previously been identified for housing and with 26 affordable homes, the application met the council’s 35 per cent affordable requirement. Mr Lawson also highlighted the fact the application included a public open space, fully equipped play area, footpaths, cyclepaths and drainage and education contributions.

On approving the plans, Cllr Steve Liddiard said there was a need for new housing in the borough, and Cllr Rice added that the committee’s hands were tied by the fact a need for housing is in the council’s core strategy and that the site had been identified for housing.