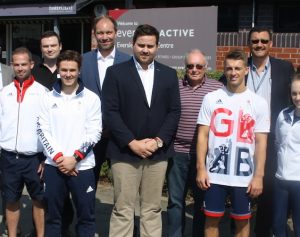 SOUTH ESSEX GYMNASTICS CLUB are happy to announce it will open a second centre in Pitsea in 2018.

Facilities at the Eversley Leisure Centre, on Crest Avenue, will open in March and help tackle a waiting list of about 3,500 residents who want to make use of the club’s popular classes and facilities.

The new centre will have free parking and about 50 staff and will focus on recreational artistic gymnastics for boys and girls and gymnasts with special needs.

It will also host SEGC’s popular pre-school section and offer new trampoline classes for all members of the public.

The administration centre will remain at the club’s site at the Basildon Sporting Village but Eversley will have a reception area.

The plans were approved by Basildon Council on July 27 and you can read the local authority’s full press release below this article.

SEGC chairman Roy Short said: “The club has worked closely with Basildon Council and listened the Pitsea community to bring this project to fruition and we are delighted it has been approved.

“The move will help address a pressing need to use the club’s facilities for those on our waiting list who are currently having to wait more than two years for a place, and we hope this will be welcome news for them.

“Feedback from the public consultation showed gymnastics is a popular activity and there is a need for opportunities to be active in Pitsea. We look forward to working closely with that community on those aims.”

Eversley Leisure Centre currently has a community a sports hall and a gym, is home to four badminton courts and caters for five-a-side football, short tennis, basketball and netball.

In 2010 the club moved into the brand new facilities at the Basildon Sporting Village, where it has hosted international competitions and was a training venue for the London 2012 Olympic Games.

The club caters for gymnasts of all ages and abilities from grassroots level to elite. It boasts a number of international standard athletes, including British Olympic medallists Max Whitlock and Amy Tinkler, who work under the guidance of Director of Coaching Scott Hann.