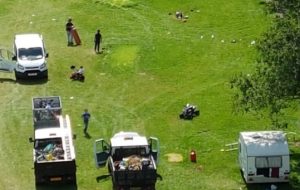 THE LEADER of Thurrock Council has made an outspoken attack on Essex Police over their approach to an unlawful encampment on Kilverts Field in Grays.

An unlawful encampment arrived on Kilverts Field, close to Argent Street in Grays several days ago. But instead of robust and swift action, the encampment remained there for several days.

When Thurrock Council obtained a court order, it appeared that the encampment simply moved fifty metres to the nearby car park.

A spokesperson for Thurrock Council said: “Thurrock Council is aware that there is an unauthorised encampment at present on Thames Road Car Park. Essex Police and council officers attended on the morning of 7 August to assess as per usual process.

Due to the size of the encampment, Thurrock Council requested that Essex Police use the powers available to them to effect immediate removal under Section 61 of the Criminal Justice and Public Order Act 1994.

Whilst in attendance with Essex Police, Thurrock Council issued five Penalty Charge Notices to vehicles forming part of the encampment parked in violation of the site parking rules.

Thurrock Council has also notified the Essex County Wide Traveller Unit (ECTU) and requested them to start proceedings to secure eviction of the unauthorised encampment – which they have begun.

Leader of the Council, Cllr Rob Gledhill, said: “I am appalled that the police have again chosen to not use their powers to move this unauthorised encampment on. There seems to be reluctance by them to use their powers and I will be writing to the Police and Crime Commissioner and Chief Constable of Essex Police expressing the dismay of Thurrock residents.”

Thurrock Council is also aware of rubbish which had been deposited on Kilverts field. The council worked quickly to remove any remaining rubbish and completed a site clearance on 7 August.

Fixed Penalty Notices (FPNs) are always issued where there is sufficient evidence available. Records of FPNs are not recorded against specific parks, however between 31 July and 7 August 45 FPNs for littering were issued in the Grays area.