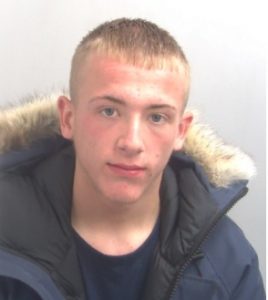 DETECTIVES are continuing to appeal for information to trace Bradley Blundell, who is wanted in connection with the murder of John Pordage in Chelmsford.

Detective Chief Inspector Martin Pasmore, of the Kent and Essex Serious Crime Directorate, said: “I would strongly urge Blundell to contact police and give himself up.

“Anybody who is found to be assisting him in any way will be subject of a thorough investigation and could find themselves prosecuted for assisting an offender.

“I consider him to be dangerous and ask members of the public if you see him, do not approach him but call 999 immediately.

“I also urge anyone who has information on Blundell’s whereabouts but does not wish to contact police directly to please contact Crimestoppers anonymously.”

Blundell was last known to be living in Chelmsford and has links to Great Baddow and the Thurrock area. He also has links to the Norwich area of Norfolk.

Five arrests have now been made in connection with the murder investigation.

Saul Stanley, 18, of no fixed abode, was charged with four firearms offences and a charge of handling stolen goods.
He appeared at Chelmsford Magistrates’ Court this morning. He was remanded in custody and is next due to appear at Chelmsford Crown Court on September 6 for a plea and trial preparation hearing.

A 16-year-old boy from Chelmsford who was charged with murder, possession of an offensive weapon, handling stolen goods and perverting the course of justice, appeared at Chelmsford Crown Court today.

He was remanded in youth detention and is next due to appear at Chelmsford Crown Court on October 10 for a plea and trial preparation hearing.

Three other people arrested on suspicion of assisting an offender have been released under investigation.

DCI Pasmore said: “Officers have been working tirelessly and carrying out extensive enquiries to piece together information around the circumstances leading to John Pordage’s tragic death.

“Now the investigation has progressed further, we have established the person who shot Mr Pordage was not known to him.

“However I continue to keep an open mind about the motive behind this horrific incident and continue to believe it was a chance meeting.

“Forensic examinations have now established that two firearms located in the Chelmer Village area of Chelmsford on Sunday night are not linked to the murder investigation.”