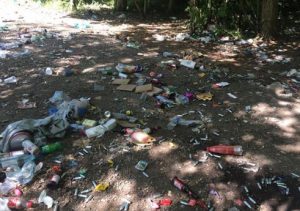 OVER the evening of the 12th August 2017 another unlicensed music event was held in Davy Down Park. This was the fourth unlicensed event to have occurred in Ockendon this summer. Previous events were held by the same organisers on the 27th May and 15th July in the Mardyke Woods. Another event apparently not connected to the above was also held on 29th July 2017 in an underpass under the A13.

UKIP Thurrock Cllr Luke Spillman said: “We have been liaising with the police and understand that action against the organisers of the three linked events is proceeding. The group are a legitimate music event promoter and are fully aware that setting up such events is illegal.

“Police have told me that in each case the group has cleaned the area of all rubbish after the event finishes. Whilst this is admirable it is not enough to justify turning a blind eye to these events. Licensing laws are not in place to stop young people having fun. They are there to make sure that venues are properly supervised, are safe and are not causing an unacceptable nuisance to nearby residents. It is worrying to consider what the consequences could be if there was a serious accident at one of these events. This is why all events must be licensed.

“However as a borough we must also look at our continued failure to provide a vibrant night-time economy in Thurrock. The reason these events are occurring illegally is linked to the absence of late license venues catering for such events. There is very little for young people to do in Thurrock, especially those who cannot afford to travel to London.

“I intend to raise all of the above issues at the next full council. I will also be asking whether the lack of police in Thurrock has been the reason that police have been unable to close the events down even when they have attended.”