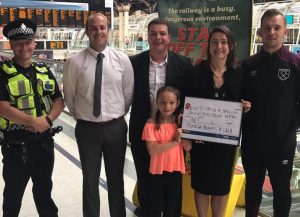 NINE year old Summer Scopes from Stanford-le-Hope, has won a nationwide competition to design a poster to raise awareness of railway safety. Her winning poster design will appear at Network Rail stations across Britain today, helping to reach millions of young people with messages about railway safety.

Over the past 10 years almost 170 young people have lost their lives after trespassing on the railway. Just under half of those killed are under the age of 25. Alarming figures from Network Rail also reveal that children are twice as likely to trespass on the tracks over the summer months, compared with winter¹. Longer evenings, coupled with the summer holidays, spell danger for Britain’s youth, with almost 600 trespass events reported in August, compared to less than 300 in December.

To combat this rise in incidents on the railway, Network Rail launched the ‘Stay off the Tracks’ poster competition through their partners the Tackling Track Safety Partnership. The competition aimed to inform young people of the dangers of trespassing on the railway ahead of the summer holiday.

Hundreds of entries were received from seven- to eleven-year-olds nationwide, with Summer finally selected as the overall winner.

Summer was awarded her prize at Liverpool Street station by Eliane Algaard from Network Rail and Ross Williams and Bryan Glover from West Ham United Foundation Club who have been involved in the Tackling Track Safety Project.

Network Rail launched the Tackling Track Safety Project three-years ago. The project – which has educated more than 135,000 7-16 year olds about the dangers of the railway – works with schools in hotspot areas for trespass across the country, delivering engaging safety messages through sports-based activity sessions, such as football and rugby.

The sessions are delivered over a four week period which allows the information to be reinforced on numerous occasions. During this time, high schools in each area also receive rail safety education through interactive assemblies and presentations. The programme also aims to divert youngsters from crime or trespass by engaging 14-24 year olds in extra-curricular activities in the evenings.

Allan Spence, Head of Public and Passenger Safety for Network Rail, said: “Congratulations to Summer for creating the winning poster, which will now be displayed in stations across the country to remind young people and their parents about the dangers of trespassing on the tracks.

“Britain has the safest railway in Europe but trespass reports are rising. As the railway gets busier and we electrify more lines to improve services, we must work harder to keep young people safe by making them aware that if they go on the railway they are on dangerous ground.”

Summer was accompanied at the presentation event by her family (mum Louise, dad Aron and two year old sister Sienna). As well as seeing her poster unveiled on the digital screens in Network Rail stations, Summer’s prize included tickets to London’s main attractions, a celebratory dinner and return travel to London. Summer’s poster will be displayed digitally in Network Rail stations.

For more information on how to keep your children safe on the railway this summer visit https://www.networkrail.co.uk/communities/safety-in-the-community/