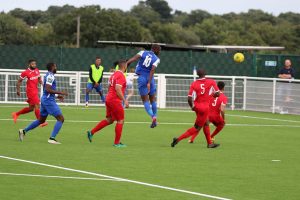 Redbridge reached the heights of the Second Round in 2012 but until they overcame Stansted in the last round had not won an FA Cup since that famous win against Oxford City in December 2011. Grays themselves hadn’t had a great deal of luck in FA Cup campaigns recently themselves. The stage was set for a hard fought encounter – and the Motormen certainly gave their Bostik League host that.

It took Grays five minutes to carve out their first chance James Folkes and Suleyman Zuhdu exchanged passes, with Folkes then bursting into the box, leaving a few Redbridge defenders in his wake, before laying it back to Zuhdu to have a shot that was deflected away for a corner.

Redbridge, who had tested Lamar Johnson in the opening minute with a free kick had been pegged in their own half but a sweeping move suddenly saw them at the other end with Bradley Gates delivering a cross that Brian Moses headed over.

Liam Thomas came to save the Motormen in the 16th minute when lack of concentration in the midfield allowed Zuhdu to waltz into the penalty box requiring the Redbridge defender to snuff out the danger with a sliding tackle. A minute later the Motormen again had a concentration lapse, believing that Folkes was offside; the assistant referee’s flag stayed down and all of a sudden Folkes was bearing down on goal but Jonathan Mbamarah blocked his shot. Grays continued to press and Lewis Greene had to cut out a cross into the six yard box which was destined for Folkes.

Redbridge withstood that spell of pressure and had a good chance themselves on 32 minutes when Eljay Worrell’s header was well saved by Johnson.

Grays however took the lead in the 37th minute when a passing move fell nicely to Zuhdu who placed his shot past Greene. Zuhdu had been involved in most of Grays’s attacking play and a minute later was harshly fouled by Mbamarah, which earned the Redbridge player a yellow card.

Johnson hadn’t been called upon too much but in the final stages of the half had to rush of his line and halt a Moses run. But the half ended badly for Grays as Folkes injured his groin badly right on the whistle and had to be stretchered off.

Moses opened the second half taking on the Grays defence but he lost possession of the ball just before he could fire off a shot. The Motormen had started the half brightly, passing the ball around, looking to create an opening, but they fell further behind in the 51st minute when Bishop played it on to Adeyinka Cole, who then crossed for Joao Carlos to slot home from close range.

Mbamarah had a cross headed away by Perry Dunn as the Motormen tried to get back into the game and they brought on Calvin Poku to try and get some kind of foothold. Courtney Homans had a decent cross from the right flank cut out by Dunn, while Jason Reynolds-Blanche finished off a nice free kick manoeuvre with an effort that Johnson had to dive low to his right to save.

Grays went close to extending their lead with Kiernan Hughes-Mason and Adeyinka Cole drilling shots wide. Redbridge then had a good chance when Joe Gent played in Courtney Homans but Johnson rushed off his line and won the ball, and although there were shouts for a penalty, the Grays keeper had made contact with the ball first. The Motormen had little time to dwell on what could have been as the next moment Jamie Slabber was inside the Motormen box; it was looking dangerous until solid defending from Thomas cleared the danger.

Redbridge battled till the end but were finished off by two well taken goals that brings their FA Cup campaign to an end for the current season. Jamie Stuart had said in his programme notes that he wanted to see Grays have a decent FA Cup run this year and will now be spending his Monday afternoon finding out who his team will be facing in the 1st Qualifying Round.