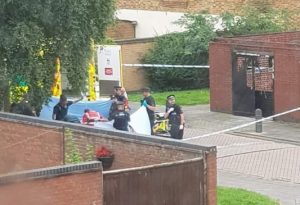 ESSEX Police have launched a murder investigation after a man has died in South Ockendon today (Monday, August 21).

Officers received reports that a man had suffered serious knife injuries in Eden Green, South Ockdendon, at around 1pm.

The man was taken to hospital but sadly died upon arrival.

A section of the road has been cordoned off for forensic examination work. No arrests have been made and enquiries are continuing.

Anyone with information, CCTV close to the scene or was driving in the area between 12pm and 2pm and has dashcam footage is asked to call Harlow Major Investigation Team on 101.

YT has received a number of reports regarding a possible incident in South Ockendon.

Images emerged at just after noon of emergency services in attendance in the Faymore Gardens area.

It appears that the air ambulance also attended.

YT has contacted both the police and ambulance service for further details.