Plans to propose Junction 28 of M25 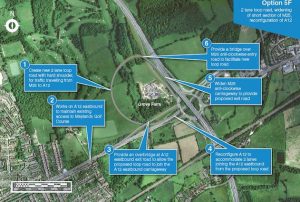 A proposed multi-million pound upgrade to a busy M25 junction in Essex has won support in a public consultation, Highways England has announced today.

Under the plans, junction 28 of the M25, where the motorway meets the A12 in Essex, will be reconfigured to improve traffic flow. A new two lane loop road will be created for traffic leaving the M25 for the A12, a short section of the M25 will be widened with the eastbound A12 interchange at the junction being redesigned to reduce congestion.

Over 90% of people taking part the consultation agreed that improvements were needed at the junction, with nearly half of respondents backing option 5F – more than twice as many as the other two options put together.

“It’s great to see that there is clear backing for the improvements, and I would like to thank everyone who took part in our consultation. We can now move on to developing a detailed design for the upgrade. There will be another opportunity for anyone interested in the scheme to have their say early next year, when we put the plans to people for their views.”

The scheme will improve journey times through the junction and allow more capacity on the exit slip roads, reduce the incident rate and resulting disruption at the roundabout, and minimise the impact on local air quality and noise by smoothing traffic flow. There will also be less likelihood of traffic queuing back onto the M25 due to the reconfiguration of the junction.