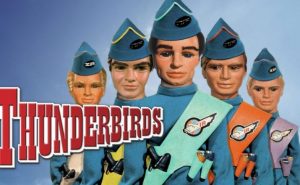 Vue Entertainment will be helping fans across the UK celebrate with a programme of exciting exclusive Thunderbirds Day screenings. This unique event, held at 2.00pm on Saturday 30th September, in 52 venues nationwide (in honour of 52 years of Thunderbirds), will include a never-before nationally screened episode of Thunderbirds in the style of the classic series, filmed in Supermarionation and using audio recordings starring the original cast, followed by two brand new episodes of the hotly anticipated Season 2, Part 2 of Thunderbirds Are Go coming to CITV this Autumn. Suitable for the whole family, fans old and new, or those looking for an introduction to the world of International Rescue, this is a one-off event that is not to be missed.

Fans are encouraged to go dressed as their favourite character (which could be Virgil Tracy, Brains, Parker or Lady Penelope) and post their photos using the hashtag #FAB@Vue to win exclusive prizes! Tickets are available at www.myvue.com/FAB (see local Vue Cinemas for details).

Further F.A.B activities to celebrate all things International Rescue on Thunderbirds Day will be announced soon!