A Thurrock DJ’s podcast has become a huge hit, with thousands of downloads each week.

Stuart Whiffen has been a popular DJ in Thurrock for many years but his podcast could be his biggest hit to date.

Stu said: “I launched the podcast a couple of months ago.

“We have had guests such as Bloc Party, Gail Porter and Thurrock’s very own Scroobius Pip.

We had a live show in London in August which sold out. That show also featured a Thurrock musician, Jordan Gray.

“We set it up after my partner Chris and I guested on Srcoobius’ own podcast called “Distraction Pieces”.

The podcasts are called Hardcore Listing. Hardcore Listing sees Chris and Stu discuss with each other as well as a host of special guests a list of top five “stuffs”. This maybe, records, gigs, TV shows, films, drunk stories, buffet food etc.

Generally recorded in Stu’s home bar The Whiff Inn, you should expect laughs, beers and the occasional drunken heart felt on the level chat. 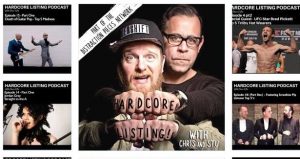