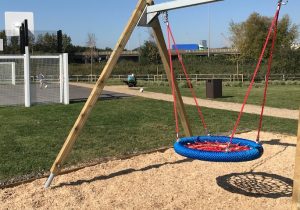 YOUNG dancers from Elite Dance Academy officially opened a new play park in Tilbury called ‘Athlone Park’ on 1 September. The kids were joined by the team from the Port of Tilbury who funded and created the park and three local councillors – Cllr Steve Liddiard; Cllr Bukky Okunade and Cllr John Allen.

The park is located off Dock Road, close to the new Amazon development in the town. The park was delivered by the Port of Tilbury and features a football/basketball court; slide; swing and a seesaw. A new footpath which passes the new park, is also officially opened and allows access through London Distribution Park to the local Asda supermarket.

The park has been named Athlone Park as it is located on the site of the former Athlone House which was previously a seafarers mission.

Commenting on the park, Peter Ward, Commercial Director at the Port of Tilbury said: “There is nothing better that the sound of children having fun and this new park in Tilbury was certainly a big hit with the kids at the opening. Athlone Park is for the community of Tilbury and we wanted to ensure that a play area was included in the development plans for the site. Thanks to the team from Elite Dance Academy for officially opening the park and I hope that it is enjoyed by everyone.”

Cllr Okunade said: “This is a brilliant new park and many people from Tilbury will enjoy using this.”

Cllr Liddiard said: “It’s great to see the Port of Tilbury delivering on their promises with the opening on this new park.”

Cllr Allen said: “It’s great to see this lovely little play park opened for the children of Tilbury to enjoy.”