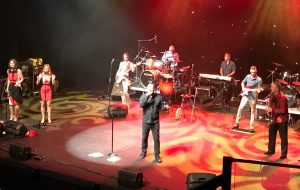 AND Finally…Phil Collins is set to take to the stage at the Thameside Theatre.

Earlier this month, reporters from our sister paper saw them at the Harlow Playhouse.

Here is our review.

THE WHOLE team behind “And Finally..Phil Collins” looked like they are enjoying themselves in a fantastic two hour show at the Harlow Playhouse on Thursday night.

From the very first drumming exhibition, it is a celebration into the music of Phil Collins.

First things first: Chris Hayward’s voice is uncannily similar to Phil Collins. Plus, he is a good singer. Secondly, the band are very tight with top quality production values. This is their tenth anniversary and you sense that this has taken years to hone and refine.

A really solid rhythm section, sassy backing vocals and exuberant horns lead to song after song, hit after hit being a celebration of Phil Collin’s work.

The numbers range from late Genesis, classic Collins to the soundtrack work as well.

Personal highlights included Eat My Hat, Take Me Home and Home By The Sea. As a Genesis fan, it was good to hear Misunderstanding from the Duke album.

There as also a corking version of In The Air Tonight.

The audience spent most of the second half up on their feet. As we said, most of it was due to the great music but also to the warm personality of Chris Hayward.

We look forward to them returning back to Harlow.