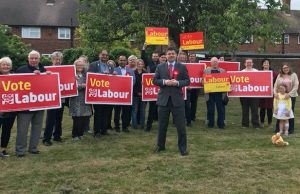 THURROCK politicians have reacted to the news that the Tory-run Thurrock Council have suspended their decision to impose new service charges for council tenants.

The former leader of Thurrock Council, Cllr John Kent said: “The, so called, grass tax has been raised so many times on the doorsteps and in advice surgeries that I have lost count.

Cllr Gledhill’s statement is a victory for democracy. The Conservatives tried to ram through this unfair tax without giving it proper thought. Now tgaey have been brought up short.

Being a minority administration means ruling by consent – as I know only too well. If you try to run things by undemocratic diktat you will come unstuck.”

Whilst UKIP councillor Jack Duffin, who raised a number of concerns regarding proposed services has also lambasted the Tories.

Cllr Jack Duffin said: “It’s a surprise to hear Cllr Gledhill admit he didn’t have any real idea what was going on in the Department he is meant to be the Portfolio Holder for.

It just confirms what everyone in the Council already believed, he is completely incompetent as Leader of the Council.

“It wouldn’t surprise me if his Conservative Group took the decision to replace him as Leader and put an end to his never ending list of gaffes.”