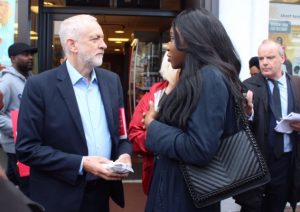 Mr Corbyn cut a relaxed figure as he mingled amongst shoppers on Grays High Street.

He was stopped on several occasions and asked a series of far reaching questions from student fees to the state of the economy.

After a couple of food stops, Mr Corbyn then went to speak to a packed audience in East Thurrock Road.

There was clearly a belief that they can take the council back next year and win back the constituency which the Conservatives hold by 345 votes.

Film of Mr Corbyn’s walkabout and speech is below.