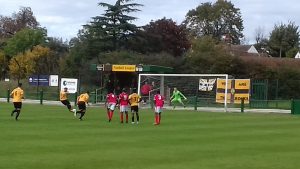 Both teams will have to go at it again on Tuesday evening after this Essex local derby ended in a 2-2 draw after a tight game that saw both teams at times cancel each other out.

Harlow’s long ball game prevented the Rocks settling and they were not able to penetrate with their passing football and so reverted to similar tactics themselves. The Ariel bombardment caused neither defence to have too many problems.

Sam Higgins did go close with a header from a corner while Xavier Videl saw his effort well saved by Lukas Lidakevicius. That was as good as the opening exchanges offered up and with the game badly needing a goal it ended up with the hosts providing it. Lewis Smith played in a lovely pass along the floor that fed Sam Higgins and the Rocks captain went on to score his tenth goal in all competitions by sweeping it past Ben McNamara to open the scoring.

The Rocks having gained a foothold now settled and were passing the ball around the Harlow box looking to create openings. George Brown found himself played in and he took on the Hawks defence but was unable to fire off a shot. Then Smith, Higgins and Agyemang played a series of one-touch passes that ended up with Agyemang having a close range shot stopped by the foot of the post by McNamara. In between then the Hawks had managed to get a shot off when Syrus Gordon outrun the Rocks defence but blasted wide of the target. But most of the attacking had come from the hosts and when Max Cornhill hit the cross bar with a header it looked like only a matter of time before the Rocks would be scoring again.

The Hawks however pulled level in the 32nd minute after Jared Small’s shot was blocked and the ball ended up at the feet of Alex Read who placed his shot beyond Lidakevicius. They then went ahead three minutes later when Lidakevicius could only parry a Craig Pope shot which gave Videl the opportunity to fire home the rebound.

The Rocks did manage to pepper the Harlow goalmouth after going behind with Smith and Harris both placing shots wide; while Agyemang’s charge into the box was halted by a Sammy Junior Dadson challenge.

The Hawks may have been finding the going tough in the Bostik Premier but they went in at the break leading and started the second half attacking the East Thurrock goal. Junior Dadson, who had shown defensive skill in the closing minute of the last period, started the first minute of the new one showing his attacking flair as he paced down the left wing before centring to Read. Lidakevicius dived low to his left to tip the shot away.

But then Lidakevicius and one of his defender went for the same ball, collided with each other and almost gifted Harlow a goal as the ball trickled dangerously towards goal before being scooped away by Lee Burns.

It took a while for the Rocks to settle but once they did they shut up their visitors but they were not able to put McNamara and his defence under too much pressure. Agyemang had a deep cross headed out by Jideofo Maduako and Harris also sped his way into the box but had his progress halted by Fabian Simms. Then James White had the first meaningful Rocks effort of the half in the 65th minute with a rasping drive that McNamara tipped over.

Two minutes later Lewis Smith was brought down in the box by Craig Pope. Referee Will Finnie had no hesitation in pointing to the spot and also pulled out a second yellow card meaning that the Hawks Captain was now on a Red and therefore sent from the field. Higgins made sure that this opportunity to equalise wasn’t wasted by hammering the penalty into the back of the net.

The Rocks were trying to work their way in using speed against a physical Harlow side and Brown was chasing a ball over the top and looked to be on his way but Audrius Laucys elected to end the run by holding onto Brown’s shirt before hauling him down. Then in the 76th minute Sammons teased his way into the Harlow box where he was felled. The referee awarded another penalty East Thurrock’s way but this time McNamara guessed correctly and saved Higgins’s penalty – denying the Rocks forward from claiming a hat-trick.

Still the Rocks came forward but Sonko and Maduako both headed away a couple of East Thurrock corners while Brown had a shot cut out by the Hawks keeper. And Higgins twice just failed to get on the end of good deliveries from White and Smith in the closing stages.

The two teams will have added stimulus when they meet on Tuesday as they would by then know who they will face in the 4th Qualifying Round.