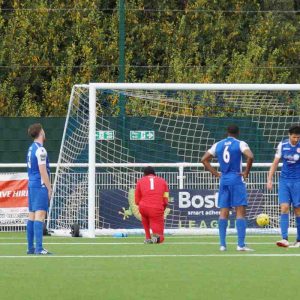 Another below par display from Grays Athletic saw Brentwood claim the points on Saturday.

Forty-five minutes after the final whistle Blues players and management were to be seen sitting in a circle on the far side of the Parkside pitch in animated discussion, no doubt holding a soul searching inquest after another afternoon of under-performance in a game where the commitment and passion was again sadly lacking. Brentwood claimed the three points plainly and simply because they wanted it more, committed to the cause they chased and harried throughout the 90 minutes helped by a Grays team who seemed disinterested. The amount of time and space the visitors were given was alarming, on numerous occasions a Brentwood player received the ball in acres of space and was allowed to turn unchallenged and move the ball with ease. What is so frustrating is that the same players produced a scintillating display against high flying Bowers and Pitsea just under two weeks ago.

Once again Blues started slowly and inside just four minutes they could have gone behind when Jack Fowler carelessly gave the ball away only to recover and then give the ball straight back to Foster who tested Lamar Johnson from range. Foster again came close when he was left in space on the edge of the box he turned unchallenged and rifled the ball just over. Johnson then made a vital save turning Freeman’s snapshot behind.

Blues rallied and enjoyed a good spell of possession, Jamie Slabber latched on to a ball from Brown and sent in a dipping volley which keeper Page clutched to his chest. Suley Zuhdu tried his luck but again Page saved comfortably. Kai Brown was next to set up a chance when he sped down the left flank sending in a deep cross to the far post where Page flapped at the ball but managed to turn it behind for a corner. Blues during this period failed to carve out a clear goalscoring opportunity.

One incident towards the end of the half summed up Blues afternoon; awarded a free kick on the edge of the visitors area Sam Cross lined up the ball and promptly played it with no pace straight into the wall, more a back pass than a shot on goal.

Throughout the half the visitors looked the more dangerous going forward, with Freeman causing real problems, he was to open the scoring in time added on when Blues failed to clear the ball out of defence, the ball was played back in and deflected into the path of Freeman who fired past Johnson.

Blues fans were looking for a reaction from their team in the second half after a first period where they seemed bereft of confidence but Brentwood had other ideas. Just four minutes into the half a clumsy challenge by Fowler inside the area saw the visitors awarded a penalty. Freeman who had proved a real handful stepped up but was denied by a brilliant save from Johnson beating the ball away. Freeman again caused havoc picking up the ball he turned quickly and ran 35 yards unchallenged to the edge of the box forcing Johnson into another vital save.

Blues began to apply pressure on the visitors goal, Bishop had a half chance hooking the ball forward which was  deflected for a corner. Fowler rose highest from the kick and saw his header slide wide of the far post. Sub Carlos did well to intercept a Brentwood pass and quickly fed Bishop but he blasted over. Brown tried his luck with a 35 yards screamer brilliantly turned over by Page.

Johnson in the Blues goal was called into action making a vital save from Foster as Brentwood looked to increase their advantage, at times cutting through the Blues back line with alarming ease .

A flurry of late Blues corners failed to trouble the Brentwood back line who held on to claim the points and condemn Blues to a seventh consecutive league defeat which leaves them floundering at the wrong end of the table.

What was so disappointing about this defeat was the lack of passion and commitment to the cause in a disjointed display, in stark contrast to their opponents who battled and scrapped for every ball and thoroughly deserved their victory. The puzzle for the Blues management and frustrated fans is that their team has showed what they are capable of in an outstanding display at Bowers and Pitsea where they applied work rate and a will to win to their undoubted skills.

Full commitment and effort from all concerned will be required on Tuesday evening when they travel to meet league leaders AFC Hornchurch.