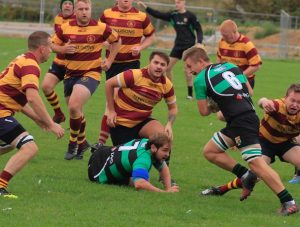 WITH Westcliff only being able to field 14 players at the start of the game, Thames agreed to match in numbers with both sides playing without fullbacks initially. Westcliff clearly had the bigger pack and used this to their advantage from the start of the match, but Thames had planned for this and battled hard to deflect the strong attacks.

Eight minutes in Thames’ hard graft paid off as they turn over the ball, flipping it out to Max Clarke on the wing who showed a clean pair of heels to the Westcliff right wing as he sprinted 80 metres to touch down under the posts. Lee Cairns made light work of the conversion. Clarke was involved in the next try for Thames, as the forwards punch up field, Jamie Evans passed the ball out from a quick ruck to Clarke who delivered a cross field pass out to Rhys Dell on the other wing. Dell took the ball at pace and simply skirted his opposite number to run over for Thames 2nd try.

The rest of the first half was a good contest between the two sides, strong attacking rugby and solid defence by both teams. The second half saw Thames open out their lead with a wonderfully worked try from the back line, as Captain Daniel Proctor sprinted through a gap and over the try line. There followed a serious of unfortunate injuries to both sides, firstly Thames had to change a front row player and then Westcliff’s number 8 had to leave the field reducing the home side once again to 14 men. In the spirit on the game Thames once again agreed to match numbers. As the game continued Thames then suffered an injury to Daniel Napper resulting him having to leave the field meaning scrums having to go uncontested, which was a shame as they had been extremely entertaining throughout both halves to this point.

The next score came from Clarke as he supported a strong powerful run by Mark O’Connell and Thames had their fourth try of the game. The conversion was added by Rhys Dell. Thames now had their heads up and minutes later O’Connell went from try provider to try scorer with another typical bullish power run, try number five.

Proctor was the next Thames player to set Clarke off for a try as he broke two attempted tackles and then timed his pass to a full pace Clarke who stepped one defender and then out sprinted the covering defence. Cairns added the extra two with ease. Thames’ forwards were setting a strong base for their backs to run onto and as Daniel McConnell got on the end of one such move, the interchange between all the Thames players had stretched the Westcliff defence and McConnell showed he had pace running in under the posts, with 10 minutes of play still to go. Cairns had no trouble with the conversion.

Thames work hadn’t finished for the day and Clarke added his fourth of the day with a superb darting run that Cairns Converted and then McConnell finished off the game with his second and Thames ninth try when he broke through and scored out wide. Final score Westcliff 5 – Thames 55.

Thames man of the match was awarded to Daniel McConnell; coming on at half time he upped the Thames confidence with positive supporting chat, strong defence and text book running lines.