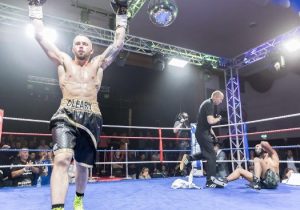 O’Leary defended his title against Lucifer Colossus from Southend in the main event of the evening.

The bout was scheduled for six rounds. In the first round, Colossus came out and tried to put pressure on O’Leary from the start but O’Leary covered up well, composed himself and came back with some excellent well placed body shots on Colossus which sent Colossus to the canvas for the referee to give him a standing eight count.

Once Colossus recovered, O’Leary went straight back in with some great shots from all angles but Colossus was saved by the bell. In the second round O’Leary dominated from the off and with great movement and power knocked Colossus to the canvas once again, with a fake jab and then a devastating overhand right which resulted in a great KO victory for O’Leary.

O’Leary, who has already won the light heavy weight EBA titles and super middle weight title will now be hopefully dropping down another weight to challenge for the EBA British middleweight title in November.

O’Leary would like to say a big thank you to his team, his fans and supporters and also the venue. George is also very grateful for his sponsors Grayers Graphics, Sana Electrical, JM Sealants and Walton Freight Ltd.