Thurrock Labour reveal team to fight local elections in May 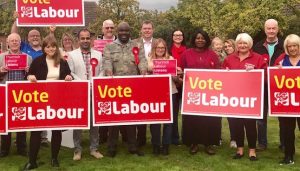 THURROCK Labour have begun to announce their prospective council candidates for the May 2018 local elections. Labour will field candidates in all 16 wards with elections. A third of the council seats are up for election, and will decide the balance of a council that has been in no overall control since 2014 and led by the Conservatives since 2016.

Labour are targeting a number of key gains to increase their representation on the council. Following the collapse of the UKIP vote this year, Thurrock is now seen by Labour, as a straight fight between Labour and the Conservatives for control.

The Leader of Thurrock Labour Group, Councillor Oliver Gerrish, said “I am very excited by the group of prospective candidates that have been selected for the 2018 elections.

“Following the General Election, where our excellent campaign came within 345 votes of winning, we now take huge momentum into the local elections next year.

“Over coming months, we will be setting out our plans on how we can make Thurrock a fairer, safer and cleaner place to live. But we will also be listening to residents right across the borough on what they want from a future Labour administration- what changes, improvements and aspirations they demand from Thurrock Council.”

“We have two councillors who have decided to stand down at the end of their terms, and I would like to pay tribute to Mike Stone and Cliff Holloway. They have both been great community champions and contributed hugely to the Labour Group. I am sorry to see them go, and I hope that in the future, when their personal circumstances change, we might see them again.”

A number of high-profile Thurrock councillors are due to defend their seats in 2018. In Aveley, UKIP’s Tim Aker will be trying to hang on to his seat won in 2014. Both UKIP and Tory Leaders, Graham Snell and Rob Gledhill will be fighting to hold their wards in Stifford Clays and Little Thurrock Rectory while Tory Health Portfolio Holder James Halden will also be defending in The Homesteads.