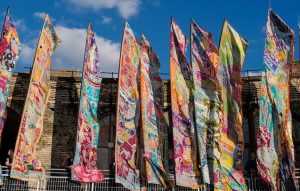 THE Diwali Festival brings together thousands of Hindus, Sikhs and Jains with people from other communities in celebration of the ‘festival of lights’.

Trafalgar Square will be transformed with a colourful and vibrant mix of music, dance and live performance to mark the Mayor of London’s annual Diwali celebrations on 15 October.

Londoners from all communities and visitors to the capital are invited to attend the celebrations, which feature lively music and dance, delicious food and drink, plus activities for the whole family to enjoy. The free event is being organised to mark Diwali, the ‘Festival of Lights’, which is observed by Hindus, Sikhs and Jains in India and many other countries around the world. It is being staged by the Mayor of London with presenting partner Lebara Mobile and supporting partners UK-India Year of Cultre, BBC Asian Network and The LaLit Hotel.

The Diwali Festival is produced in association with the Diwali in London committee.     The festivities will kick off with a colourful procession of flags, taken from Kinetika’s ambitious project Silk River, which explored the unique relationship between London and Kolkata through a year’s artistic exchange between communities along the Thames Estuary and Hooghly River. All are invited to enjoy traditional garba dancing accompanied by a full-scale garba band before a variety of live music and dance performances take to the stage. Later, BBC Asian Network will be introducing the best of British Asian contemporary music talent, from London based dueo Parle Patel and Pritee Varsani to India based rapper and producer Ra0ol.

Throughout the day, an Indian street food market will sell a variety of tasty vegetarian food and non-alcoholic drinks. There will also be plenty of chances to stock up on Indian essentials including jewellery, spices, rangoli and ayurvedic products.  Revellers will have the chance to don a sari, learn a Bollywood dance, participate in yoga and meditation sessions for beginners, get a henna tattoo, pick up top health tips, find out more about Diwali and the faiths behind it, or simply enjoy this year’s illuminations. A comedy line-up featuring Aditi Mittal, one of the first women to do stand-up comedy in India, will also entertain on the day.    Children can take part in a range of activities at the festival, including story-telling sessions, games, and arts and crafts all linked to Diwali traditions.    The Mayor of London, Sadiq Khan, said: “As Mayor of London, I want to send my warmest wishes to everyone celebrating Diwali in London and around the world.

“During this wonderful festival of lights, we come together to share the story of Rama and Sita, to light candles in our homes, and to pay tribute to the warmth and generosity of our Hindu, Sikh and Jain brothers and sisters. Friends and families reflect on the past year together, and mark the triumph of good over evil, light over darkness and friendship over enmity.

“Diwali’s central message of peace and mutual respect is one that we can all learn from. It reminds us that London succeeds when London is open to all.

“From my family to yours, Happy Diwali and a prosperous new year.”

Ravi Bhanot, Diwali in London Committee Chairperson 2017, said: “This year we celebrate 16th year of Diwali in Trafalgar Square, London. In this, the UK-India Year of Culture, we invite all to come, share and enjoy this wonderful festival that is filled with lights, lamps, music, dances, prashad (oblation) and much more. This occasion is of great significance to Hindus, Sikhs, Jains and Buddhists and is increasingly a festival celebrated by people of all walks of life. The underlying theme of peace and mutual respect is relevant and meaningful to all Londoners. On behalf of all diverse organisations of DiL, I wish you a very Happy Diwali.”
Dr Jyotsna Suri, Chairperson and Managing Director of The Lalit Suri Hospitality Group said: “We are delighted to be part of the Mayor of London’s Diwali festivities at Trafalgar Square. This festival of lights celebrates the triumph of good over evil.  The LaLiT London looks forward to welcoming the Londoners with our traditional Namaskar.”

Graeme Oxby, Chief Executive of Lebara Mobile said: “At Lebara Mobile, we understand the importance of connecting people, especially during such a special festival as Diwali. We’re very proud to again be supporting such a fantastic event in the heart of London. We’re looking forward to helping make this year’s event even more successful. Happy Diwali everyone.”