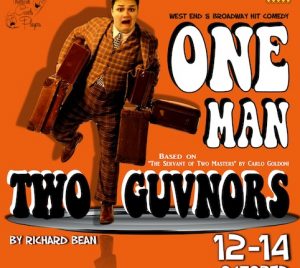 “What a great end to my day! One Man Two Guvnors. Less than a minute into the play I was shaking with laughter; my mum said she had never laughed so much. It really was a laugh-a-minute with something for everyone: witty full frontal asides to the audience; a touch of the Northerners; a bit of audience participation; a smattering of the ooh la-las; a shot of the Irish; a bit of posh… and Latin. All in Brighton! In 1963! Oh what a Carry On! Geddit!

EACH member of the cast was excellent and really held their own but, I’ve got to hand it to Sean Hynes as Francis Henshall who keeps things cooking for the whole show.

The simple but effective sets lended themselves perfectly to the visual comedy – though there was some hilarious shakey moments courtesy of Josh Handley as Alfie the octogenarian waiter.

I take my hat off to Eric James, director of this production and I echo his sentiment “it’s a great play with a great cast!”