Corringham man jailed for five years for string of burglaries 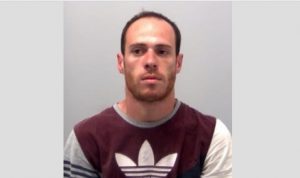 A GANG, who targeted businesses in a burglary spree, have been jailed for a collective total of over 16 years.

Jamie Johnson, Robert Flint and Joshua Lloyd were linked to a series of burglaries through forensic examination work, CCTV and phone analysis.

In the first burglary, two stolen BMWs arrived at the Co-Op in The Sorrells, Stanford-le-Hope, in the early hours of January 21, 2016.

One reversed into a window to smash it and a tow rope was tied to a stand-alone cash machine inside the shop, before being towed out and loaded into car.

The machine was found dumped on a grass bank near the railway line in Benfleet on March 2. The £14,600 inside had been stolen and never recovered.

Johnson and Flint, both aged 26, were arrested a few days later and questioned, before being released on bail while police continued their enquiries.

Then in the early hours of March 8, three men were seen in a 4×4 type vehicle arriving at the Co-Op in Nevendon Road, Wickford. They used the car to force open the rear doors of the building. Several attempts were made to break into a cash machine using a circular disc cutter, but they left empty-handed.

The following day, a stolen BMW was found in Wickford. The car contained items including a disc cutter, bolt croppers and a glove, which all were forensically linked to Johnson and Flint.

On 31st March shortly before 2.30am , three men arrived in a Ford Fiesta at William Hill bookmakers in Grange Parade, Billericay. Two smashed the door and left. The trio then returned at about 3.55am. One went into the shop briefly then left. Nothing was taken.

On April 4. At around 12.10am three men were seen outside Rightprice convenience store in North Street, Southminster. Two attempted to break open the door and returned about three hours later but drove off after the alarm sounded.

The Fiesta was stopped on the southbound A13 about two hours later. It was driven by Johnson, the sole occupant. He was wearing an Adidas jacket matching that worn by one of the men who broke into the Co-Op in Nevendon Road.

Lloyd was arrested later that day at his home in Oak Green, Billericay. In his bedroom were a Nike jacket and bag matching those worn by one of the men in some the crimes. Forensic examinations also linked him to the tampering of the alarm sensor at the first Co-Op burglary.

All three were charged in January this year with conspiracy to burgle, seven counts of burglary and one count of attempted burglary.
They stood trial at Basildon Crown Court on October 16.

Lloyd, 22, pleaded guilty to burglary at the Co-Op in The Sorrells, Stanford-le-Hope and Rightprice Store, North Street, Southminster.

Four further offences are to remain on file.

Detective Chief Inspector Josie Hayes, of the Kent and Essex Serious Crime Directorate, said after today’s hearing: “Flint, Johnson and Lloyd declined to answer questions during police interview and denied any involvement in these crimes.

“But ultimately the evidence against them was overwhelming and caught them out.”