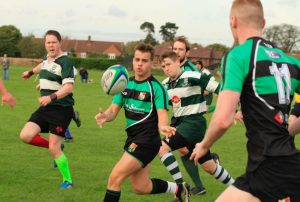 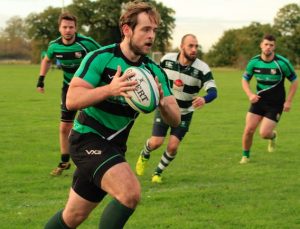 ENTERTAINING, competitive and spirited rugby, those that stood on the side-lines to watch Thames host Basildon 3s were in for a feast of all three. Basildon kicked off but over eagerness saw them pulled back and a scrum awarded to Thames for being in front of their kicker. Basildon’s obvious commitment and determination never waived for the whole 80 minutes despite conceding tries, they bashed and smashed their way into Thames and at the end of the first half Basildon had scored two very good tries having converted one. The first half belong though to Thames with 5 tries and two conversions.

Thames first score came from Kyle Munro, set up by Mark O’Connell off a quickly taken penalty, the power of O’Connell tore a hole in the Basildon defence offloading to a rampaging Munro. Munro was involved in the next score for Thames only minutes later, when he broke down the side line drawing his player passing inside to Ryan Edgeway who bullied his way over the try line. Munro was unstoppable, having scored and setup he was again on the score sheet with Thames 3rd try as they played a training field penalty move and Munro finished off a very sweet phase of play.

Munro’s wing partner Max Clarke now got into the show. Having been denied a try after just 2 minutes, when he was tackled out of play only inches from the line, he ran in two outstanding tries only minutes apart. Clarke’s first came from supporting play, as Rhys Dell weaved his way through the Basildon line and popped onto an unstoppable Clarke in full flight. Clarke was standing under the posts almost immediately from the restart as Thames recycled the restart kick and Clarke ran from inside his own half to under the Basildon posts. Lee Cairns made light work of both conversions from Clarkes tries.

At half time Thames lead 29 points to 12. Within minutes after the start of the 2nd half Clarke scored his hat trick off a strong forward phase of play, Cairns added the extra points. Dell’s work rate in the first half had been remarkable and when he broke free after turning Basildon inside out it was disappointing when he was brought down just before the try line, he ensured his efforts didn’t go in vain as he shipped the ball onto Matt Vallis who finished off the move under the posts. Cairns again was accurate with the ball. The third Thames try of the 2nd half came from Ryan Slaney as he darted from the back of a controlled maul dragging a Basildon tackler with him. Cairns bisected the posts for two more posts.

Thames were playing some very good flowing Rugby but Basildon were still pounding their defensive line and Morgan Podmore was shown a yellow card for coming off side trying to contain Basildon, reducing the home side to 14 men. Despite being down Thames still went on the attack, Clarke seeing space behind the Basildon line called for Cairns to kick ahead. Clarke was too fast for the visitors and he strolled in under the posts after collecting a well-timed bounce. The next try was a favourite of the Thames supporters, when Marcus Edgeway touched down. Liam Smith broke free of the Basildon Line but was not quick enough to outpace his chasers, using Munro who was in hot pursuit the move continued but as Munro was stopped he handed the ball back to Smith who in turned off loaded to Edgeway who had been chasing the play from the start of the move. Cairns kicked over for two points.

Munro had seen his wing partner Clarke score his hat trick then add a fourth try so not wishing to be out done he finished off Thames eleventh try. From a Basildon lineout Smith stole the ball creating a Thames maul. Munro added his bulk to the back of the maul spun out down the blind side. His quick actions gave him a clear advantage and dived over the line after a 30 metre sprint. Cairns restarted the game and immediately put Basildon under pressure, turning over the ball into their possession Thames spilled the ball and Basildon were awarded a scrum just 5 metres away from their try line. A solid scrum from Basildon gave the scrum half a chance to clear the ball but as he put boot to ball Edgar Juska was watching, he charged down the kick and fell on the ball over the try line. Cairns had no trouble with the conversion.

As time ticked down Thames went in for the kill with three quick tries. The first came from Lee Cairns after a great team move and Cairns darted over the line converting his own try. Next Ryan Edgeway broke the defensive line, he sprinted straight for the posts then passed to Liam Smith who scored. Almost a copycat try followed when Morgan Podmore broke through and finished his own break. Cairns converted both tries.

Although Thames had scored 15 tries to win, 95 -12, Basildon received huge plaudits for their efforts and battling to the very end. A special mention should be given to Thames Dave Sullivan who stepped in to play for Basildon early in the 2nd half when one of their pack took a nasty knock.

Thames awarded their man of the match to Ryan Edgeway. Edgeway scored, set up and was vitally important to every part of Thames play from the day.